Today marks half a century since the death of Millicent Todd Bingham. Because Millicent, herself, was so attuned to the significance of different dates and anniversaries, I want to mark this occasion with a few thoughts that honor her.

As I’ve written in After Emily, Millicent was a woman of many talents, but someone who cared – and cared deeply – about being as high achieving within each area of her life as possible. For

instance, when she was a junior at Vassar College and had the opportunity to take a semester off to travel with her parents on an astronomy expedition to Asia, she fretted about whether doing so would impede her excellent academic record and prevent her from being elected to Phi Beta Kappa (it didn’t). She gave up playing the violin despite being a fine musician because she worried that her other academic pursuits and travel would prevent her from practicing enough to attain professional-level skill. And later in life, she obsessed over whether her Dickinson scholarship would be valued because her doctorate was not in English literature; receiving two honorary doctorates for her work still didn’t seem to convince her.

In a recent profile of Millicent I published in Harvard Magazine I delineated her lifelong concerns about her many talents. Rather than being satisfied with what today we would call interdisciplinary work, Millicent forever worried that she somehow lacked the proper credentials to do her work. Yet she demonstrated aptitude in both the sciences and the humanities, published books in geography and literature. Her scholarship was impeccable and meticulous in both fields.

Millicent’s environmentalism was remarkably prescient. While Mabel believed that it was important to buy land to save great trees from loggers, Millicent somehow knew that land preservation was necessary for ecological reasons. Here’s something she wrote in 1936:

“The problem of conservation has been brought to public            attention very often of late, in books and articles, over the radio . . . but in spite of all the activity, however, the general public is not yet aware of what it is all about. . . . They are . . . results following causes which we, ourselves, have set in motion—destruction of forests, over- grazing, marsh drainage, and so on.”

Years before anyone uttered the term “climate change,” Millicent somehow recognized what was going on.

Her recognition of the importance of teaching environmental appreciation in an experiential way was equally remarkable, hence her quest in the 1930s to make Hog Island into a place to teach teachers about ecology, and to make her gift to the National Audubon Society permanent. Today the camp at Hog Island thrives and remains vibrant, as generations of campers will attest. (You can read more about the Hog Island Audubon Camp here).

One other thing I’ve highlighted about Millicent Todd Bingham is that, although she was well aware of each of her parents’ flaws and foibles, she still felt deeply connected to them. And to her family roots in a broader sense. Millicent was keenly aware of where she came from. Sometimes she felt this as a burden that weighed her down, but more often, she believed that her sense of familial obligation was part of a proud and important tradition. I found – and continue to find – her devotion to her family, despite her understandably mixed feelings, affirmative.

Millicent’s beliefs in scientific rigor and in great art in a number of forms made her someone who thought of marking big anniversaries as an important thing to do. I’m pretty sure that she wondered if people would mark anniversaries of her life. In noting this anniversary of her death, however,  I want to celebrate her life. 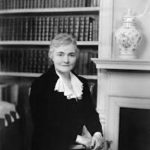