On this day in 1932, Mabel Loomis Todd was getting ready to close up her beloved Camp Mavooshen on Hog Island and return to her home in Florida for the winter. When her dear friend Howard Hilder (an artist who drove her back and forth between Maine and Florida, assisted her with tasks at both homes and escorted her to many an event) asked if there was anything more he could do to help, she laughingly replied, “Yes, more than a million things.”  “A rather large order,” Hilder responded, “but I will begin and we’ll finish them somehow.”

But Mabel was never to finish all of the unfinished tasks. Nor was she to complete all of the innumerable projects in which she was engaged: the article about the creation of the Everglades National Park she was writing, correspondence she had begun, scrapbooks she was working to update. On this day Mabel suddenly had a massive cerebral hemorrhage, fell on the porch of the house she and David had built and treasured, and died hours later.

When I was doing the research for After Emily, some of the items that affected me most profoundly were found in the enormous scrapbook that Millicent put together after her mother’s death. Like many of Millicent’s scrapbooks, it has so much material that its leather bindings long ago cracked. It contains, among other things, copies of numerous obituaries and tributes that were published and read publicly and hundreds of condolence letters from around the world.

The album begins with the two Western Union telegrams Howard Hilder sent Millicent: “Mama very ill, come at once. Hilder” and “Your mother passed away this afternoon. Please telegraph immediately.”

And it ends with a note that Millicent glued into this scrapbook which came from someone whose name she somehow chose not to note or preserve. But the sentiment expressed seemed so universally held among those who wrote to Millicent that its authorship almost does not matter. It read in part, “But deep as the little Amherst world was in her debt, the debt of the big world of literature to her was wholly different…and will survive many, many college generations to come…On this somber morning I bring up the remembrance of your mother. I like to remember her as living. She was so well made for living. She lived so much and so completely, last year at this time, what a ravishing picture, the pink dress, the jewels, the eyes more shining than the jewels. She was carrying forward the beautiful pure spirit of Emily Dickinson.”

I try to go to Wildwood Cemetery on each of my trips to Amherst. On my most recent visit, I brought with me two late summer blooms from my own garden that I laid on her grave. And on this day, the 86th anniversary of her death, I like to believe that Mabel, who loved to gather and preserve flower petals, would appreciate this gesture of tribute. 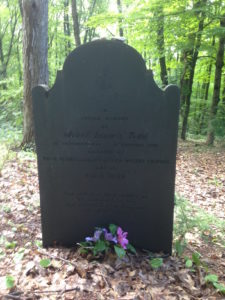