This week marks the first full week during which I will be giving book talks and doing book readings.* As is so often the case, I find myself thinking of Mabel.

Mabel began giving talks in 1891, in a carefully orchestrated effort to garner more publicity for the first volumes of Emily Dickinson’s poetry. To her surprise and delight, Mabel found that this was an activity she truly enjoyed, and, by everyone’s account, was exceptionally good at doing. She once wrote in her diary, “I put a good deal of nerve force into my talks, which make, I suppose, the quality of ‘brilliant success’ by which everybody describes them…a glowing vitality, if I can so call it, which carries.”

But it wasn’t just Mabel’s sense that she could carry a room: one newspaper account, for example, referred to her as a “personage in the world of letters and a well known lecturer;” another quipped, “while Professor Todd’s lecture was learned and scientific, the opinion of some who heard Mrs. Todd on the same subject was that she presented it in a much more interesting and charming way than her husband, and without the aid of stereopticon” and yet another noted, “She is unquestionably the dean of American women lecturers.”

What began as a PR venture grew. Mabel was leading a very interesting life, and she found that it was personally and professionally rewarding to find ways of sharing this with the world. The range of topics for her talks exapanded from Emily Dickinson, to astronomy, to her observations of the diverse cultures she had occasion to visit on her trips around the world on eclipse expeditions.

Mabel began to garner some significant income from her role as a public speaker, and at least as importantly, it was an activity that fed her seemingly bottomless ego. “I captured them at about the third sentence,” she wrote after one large lecture she gave to a group in Los Angeles in 1902. “How much I wish I know what I possess that does this! But the quality which takes, and keeps, an audience in the hollow of one’s hand is . . . what comes to be when I stand before a waiting audience.” 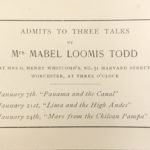 Her talks served multiple purposes. Not only was Mabel able to use them as a platform for publicizing her own (and, to a lesser extent, David’s work), but she was also able to earn a national reputation as a rare female public intellectual in an era when relatively few women were on the lecture circuit. What would she have done today, with TED talks, YouTube and the whole world of social media? One can only imagine!

Mabel’s talks also had the effect of much-needed distraction after Austin died in 1895. “Thank God for work! IT is my salvation,” she wrote. “I have never been so rushed in my life; and if it were not for that very fact I should probably be dead – or crazy.” Indeed, Mabel ramped up her talk schedule and by 1897, she was giving more than 50 talks a year in venues across the country.

So in some ways it feels like this story has come full circle, with me about to begin speaking on my book about Mabel. I hope to be half as good at speaking about her as she was about speaking about herself! But seriously, I hope that I can take a page out of her playbook, as it were, and use my talks to introduce more people to her fascinating life, the fascinating life of Millicent, and the ways in which understanding both of their lives can give us more of a window into the life and poetry of Emily Dickinson.