On this, the 139th anniversary of Millicent’s birth, I find myself thinking about what I imagine she would be thinking about: how will I be remembered? This was something that Millicent thought about quite a bit during her own lifetime. With an intense sense of family lineage, Millicent was forever thinking about her forebears and her connections to them. She reflected throughout her life about how she felt this, how her Puritan ancestors had influenced and guided her every thought and action.

Millicent also had a keen sense of history, of the passage of time. Perhaps because she was a child raised primarily by her grandparents and even by her great-grandmother, her sensibilities belonged to prior generations. She was exceedingly loyal and deferential to those who taught and mentored her. She wrote books in tribute to her grandfather, Eben Jenks Loomis, and to Mrs. Mary E. Stearns, one of her most influential teachers. “From babyhood I always collected old people – [they were] more my contemporaries” Millicent wrote in the notes for her autobiography, a task she never completed.

Ensconced – or perhaps even trapped – was she in the past. Millicent was keenly aware of this. Reflecting on her life towards the end of it, in 1964 she mused, “it is curious how my life has been dedicated to the cause of the dead – Mrs. Stearns, Grandpa…my mother, even a brief memoir of Walter. But chiefly to carrying out the wishes of mother, to set the record straight about Emily Dickinson…Tributes to the dead, in deference to the truth. Should not the final one be to myself – who have so short a time to wait? It would be in line with my life-order.”

One of the most poignant things about Millicent was her acute awareness of the fact that she was the end of the line of Wilder women. This knowledge haunted her. The ghosts of her ancestors were so much more present than any sense that she would be able to pass their sensibilities along to a next generation. Though in her thirties Millicent was convinced that “…my highest usefulness is to be the mother of children,” and at the end of her seventies, wrote,“…although some tangible accomplishments of my nearly 80 years may have helped others, I have failed in the only way by which I could have made a unique contribution, namely, by a child of my own. My storehouse of knowledge will disappear, my skills, also. But what is there that will remain?” By age 81 looking back on her life she twisted the thought: “Did I ever consider [having a child] my duty to my family? The line ends in me. Did I ever yearn for a child of my own? I cannot remember that I ever did.” But she had, most clearly. Memory might fade, might sometimes play tricks on us. In Millicent’s case, the clarity of her thought up until the time of her death suggests that she needed to try to find solace by deferring and deflecting, because she probably did remember. And if she didn’t, she certainly had an enormous amount of documentary material to jog her memory.

I don’t know if Millicent would find any small comfort in knowing that at least in surface ways, what goes around, comes around. In a recent quest for trivia, I found myself looking at the most popular baby names for 2018 and 2019 “Emily,” clocking in at #12, wasn’t really surprising. “Emily” has been on these lists for many years in my recent memory. But lo and behold, there was “Mabel,” a “new entrant” on the Nameberry top 100 list! And even more surprising, “Millie” and “Millicent” both made a couple of lists of trending names!

But in all seriousness, I do think that the thing that actually would make Millicent feel better about “how will I be remembered?” is the correspondence I have had from many people who have read my book. “Thank you for telling Millicent’s story,” wrote one woman. “She is truly the unsung heroine of the Emily Dickinson saga.” “Millicent deserves our deepest thanks for keeping the legacy on track,” said another man. And another reader suggested, “Millicent Todd Bingham should rightfully emerge from the footnotes.”

So happy birthday, Millicent. It’s one of my dearest hopes that the work I’ve done has in some small way helped to ensure that you’re being remembered in ways that I think would have meaningful to you. 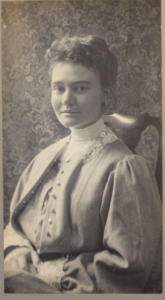