Last night at the Boston Public Library, After Emily was among the books honored by the Boston Authors Club (BAC). To be recognized by your peers – in this case, writers – is an incredibly humbling experience. But for me there was an additional layer of joy to the event, because the Boston Authors Club came into existence in part because of the efforts of Mabel Loomis Todd.

I tried to reflect this in the remarks I made:

Thanks to my colleagues on the BAC, and especially to the reading group for non-fiction, who had the very wonderful and very formidable task of reading through so many worthy books this past year. Congratulations to Alexander Bevilacqua, Eric Dolan and Simon Winchester. I am honored that my book was considered alongside all of yours.

I want to tell you all, briefly, one other reason that I am so pleased to have After Emily honored by the Boston Authors Club.

In the very late years of the 19th century, Mabel Loomis Todd hosted author May Alden Ward and Boston newspaperwoman Helen Winslow at a tea in her home in Amherst. One of the topics of discussion that day were the attempts of a group of literary minded men in Boston to form a new club of authors. The men, including such notables as Thomas Wentworth Higginson, William Dean Howells and Thomas Bailey Aldrich, had foundered in their efforts. Mabel, who among her other virtues, was an incessant and successful organizer, suggested to her women friends that perhaps if WOMEN banded together they might get the incipient BAC off the ground. They agreed, and reached out to Julia Ward Howe. Julia reportedly said, “Go ahead. Call some people together here at my house. We will form a club and it will be a good one too.”

And it was. Unlike other similar literary organizations of the era, the Boston Authors Club was started as a club that admitted both women and men.

I don’t know this for sure, but I believe that the BAC rule that any member must live within a radius of 90 miles from Boston is no coincidence, since when you clock the mileage to Amherst, it’s – you guessed it – about 90 miles!

And so, here we are, 120 years later, in part because of one of the subjects of my book.  Mabel, I’m sure, would be thrilled that a book about her is being honored by the BAC. And so am I. Thank you!

When you walk into the Boston Public Library you’re immediately drawn back into the world of another era. The dramatic entry staircase, high painted ceilings, arches and the iconic stone lions that flank it transport you to another century. And that’s what the BAC does, as well:  it links people who write and people who love books across time. 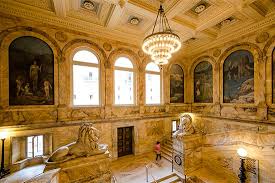 I know that Mabel and Millicent – and probably even Emily – would love that a book about their lives and work was recognized by an organization that spans time by recognizing literature the way the BAC does.