Mabel always took her music seriously. As I’ve written in After Emily, not only was Mabel a gifted pianist and singer, she was also someone who took on the study of music as part of her life’s work. She practiced more religiously than she attended church, often noting in her personal writings how many hours a day she spent working on new music, keeping lists of pieces she felt she’d mastered. In 1890, the same year as the first edition of Emily’s Poems was published, Mabel took singing lessons from the famed Italian opera singer, Augusto Rotoli.

Even as a child, Mabel seemed to be intellectually fascinated by the structure of music. Her early diaries note her discoveries of different scale types, and her ability, even without formal instruction, to transpose. Her two years at the prestigious New England Conservatory as a young woman included classes on music theory. And as an adult she continued her intellectual pursuit of music through taking a correspondence course in harmony in 1883.

Fascinated by music of all types, her travels around the world also offered Mabel the opportunity to investigate non-Western forms of harmony, different tonalities and new kinds of instruments. Her diaries contain examples of ways in which she attempted to capture her exposure to these unfamiliar forms of music: snatches of tunes she tried to capture on a staff, sketches of unusual-looking stringed instruments, even an exotic birdsong from a jungle in Asia whose music she tried to write out in notes. 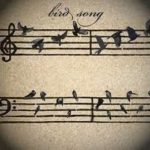 Mabel was also an avid consumer of music. She went to a lot of concerts and recitals, and, of course, retained programs from seemingly all of them. She wrote about performances in her diaries and journals.

I, too, am someone who has had a lifelong love of music. Like Mabel, I studied music as a performer and was fascinated by its structure, taking courses in theory and harmony. I, too, have loved to hear the music of different cultures. I went to college thinking I was going to major in music but ended up with a double major in anthropology and sociology (go figure!)  And while my own avocation of music has most recently been relegated to listening to it (I do hope to get back to playing chamber music, someday), I’ve never lost that passion. So I feel that one of the things I most understand about Mabel Loomis Todd is how she felt about music, throughout her life.

One of the best examples of this came from a journal entry she wrote in 1879. She and David had attended a concert in Washington D.C. She recorded that of the program, the piece that affected her

“most powerfully was a violincello solo by R. Volkmann op. 69 no. 3…I knew the other harmonies would find it, through all this longing and yearning for its peace. Lo, I waited, and as the tears fell fast and my heart throbbed with longing, I saw myself – blindly but with passionate truth seeking for peace and right and surety through the one struggle of my life. All winter I had tried for it; sometimes it had seemed within my grasp, but it always eluded me, and I felt my soul in sorry, trembling chords which tried so hard to find this one little solitary threat, the note of joy and peace and content.”

When I read this journal entry I had never heard of Robert Volkmann. Thanks to the wonders of the internet, I quickly learned that this relatively obscure romantic composer was a contemporary of Liszt and Brahms. And through the marvels of YouTube, I rapidly found a performance of this same composition. As I listened to the music, I got it. I understood viscerally why this woman who wrote so ecstatically of nature, of art, of music, who would later compose soaring odes to her love for Austin, would have felt such resonance with the passionate minor chord progressions of this particular piece of music.

After listening to this Serenade for cello and strings, I felt like my understanding of Mabel deepened. Listen to it and you will, too.