I’m hearing Willie Nelson’s refrain in my head. March 3rd marked my own return to the book tour road, with a reading at the Silver Unicorn Bookstore in Acton, MA. In the next few months I have about two dozen book events scheduled. Some of the events are in little indie bookstores, others in libraries, others in a variety of larger venues.

I’m also going to be the guest of a number of book clubs that are reading After Emily. I’m thrilled to join their discussions; no one means more to a writer than an engaged reader, and to meet with a group of engaged readers is a writer’s dream come true!

There also seems something somehow appropriate about my going out on the lecture circuit to talk about Mabel. A large part of Mabel’s professional career was documented and publicized by the many lectures she gave. At the height of her career, Mabel was giving more than 60 talks a year in venues across the country. She spoke on an astonishing number of topics. 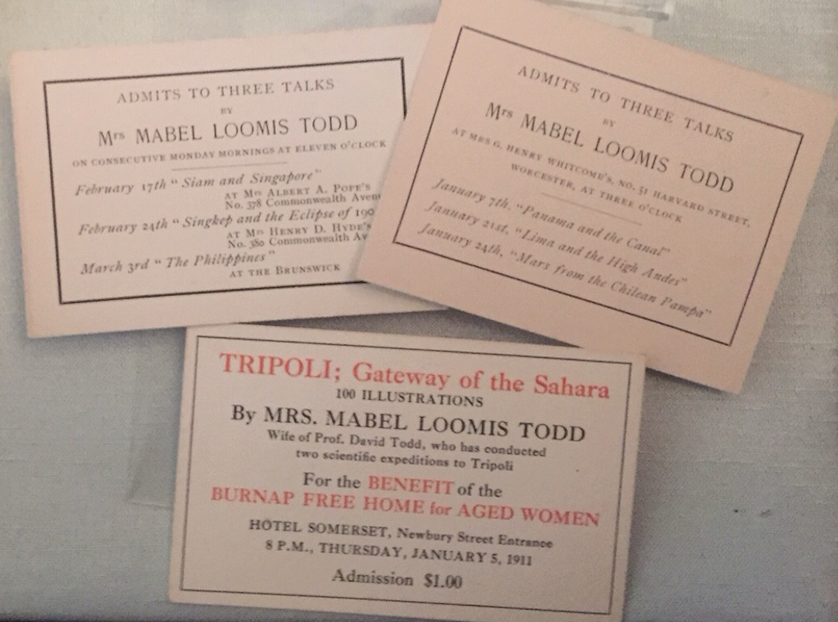 When I went through a folder of her lecture notes at Yale I was amazed to see outlines for talks about not only Emily Dickinson’s life and poetry, but also about: various topics on astronomy, “Bermuda, The Summer Islands,” “Carthage, Then and Now,” “Club Life for Women,” “The Cruise of the Coronet,” “Ellis Island, “Famous Women,” “Granada and the Alhambra,” “The House Beautiful,” “Japanese Art,” “The Lost Art of Letter Writing,” “Quakers in America,” “Witchcraft in New England” and many, many others.

Mabel kept a little notebook in which she recorded when she spoke, where she spoke and what fee or other compensation she received for her talks. Her talks were given to women’s clubs, literary organizations, university clubs and to increasingly large general audiences. Mabel was a natural and dynamic public speaker, and she knew it. After the first public talk she ever gave, in May 1890, she recorded in her journal in a characteristically self-congratulatory way, “My talk in Boston upon Fuji was very enthusiastically received. It was really the first elaborate one I ever gave, but I knew I could do it more than well. When I am to play anywhere, even without notes, my hand trembles and my heat beats tumultuously for a long time before and even when I am to sing, which is greatly easier, my heart is always quickened, often uncomfortably so. But before that Boston talk I was as quiet and happy as if some one else was to have done it. I had thought out quietly what I wished to say, but I found that dozens of bright things came to me spontaneously which I had not intended and the flow of words and pictures was smooth and inspired. My mother, who is a most severe critic, said it was the best thing she ever listened to, and she was thoroughly enthused by it.”

As she became an even more experienced public speaker, Mabel recorded that she could easily “talk to an audience and make them desperately enthusiastic, rippling with laughter one minute and their eyes filled with tears the next.” On her talk at the Sixth Biennial of the General Federation of Women’s Clubs in Los Angeles in May 1902, she reported, “I captured them at about the third sentence. How much I wish I know what I possess that does this! But the quality which takes, and keeps, an audience in the hollow of one’s hand is…what comes to be when I stand before a waiting audience.” It was certainly not only her love of being the epicenter of attention and of performing, but doing something she felt she did quite well and promoting the poetry that became such a focal point of her professional life, that made Mabel an enthusiastic and successful public speaker. The talks she gave on Emily’s life and poetry began to fill the halls and launched Mabel’s career as a public speaker and a rare female public intellectual. She relished both of these roles.

But Mabel wasn’t the only one who felt that she was a gifted public speaker. Newspapers sang her praises. She accumulated many letters from people who’d attended her lectures and found themselves informed, amused and moved by them.

I am quite certain that I could ever approach Mabel’s gift for lecturing (one newspaper clipping referred to her as “unquestionably, the dean of American woman lecturers”). But I do try to conjure my inner Mabel with every book talk and reading I do. If I can channel even a fraction of Mabel in my talks I’d be more than satisfied!