This morning I woke up to an extraordinary full moon setting over the pond in the back of my house. Slightly orange, very bright, it slowly dipped down across the horizon. According to Space.com, this was a “Super Snow Moon,” one of a trio of “supermoons” for 2019 (which appear about 10% larger than most full moons due to the moon’s position relatively closer to the Earth. The February 19 supermoon is the biggest one of the year.

Seeing any astronomical sight always makes me think of the Todds. David’s eclipse chasing focused more on solar eclipses than on lunar ones, but he certainly spent a lot of time thinking about and making calculations on the moon’s positioning. The Todd crater, which is a moon or a natural satellite of Mars, is named for him.

Mabel’s own writing about the moon trended towards the poetic, even when discussing astronomical phenomena. For instance, while her1894 book Total Eclipses of the Sun is probably the most closely hewed to scientific description, Mabel still utilized figurative language to explain scientific issues. Her discussion of the difficulties for astronomers along the route of an eclipse to communicate with one another in those days is a beautiful example:

Evidently the odds are largely in favor of the electric messenger, as the actual speed is many thousand-fold greater than the lunar velocity. But while the Moon moves steadily onward, telegraphic despatches [sic] are often subject to sundry and irregular detentions; so there may well be doubt as to which may outstrip the other, when both are matched together on the airy highway of space.” (p. 164) 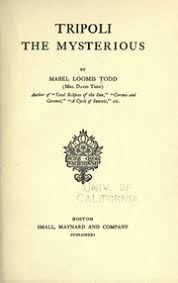 Her 1912 book, Tripoli the Mysterious, abandoned attempts to be “scientific” and simply waxed poetic in her descriptions. She wrote, “The faithful moon had crept on and on toward the great moment when she should glide in between us and the sun, and with her small bulk over the only screen to his brilliancy which has ever been effective in allowing a sight of the corona to mortal eyes” (p. 123).

Not surprisingly, the moon also played more than a bit part in Mabel’s private writings, many of which focused on discussions of times  spent with Austin. There are plenty of descriptions of moonlit sleigh rides, assignations that happened during full moons noted by her usual euphemism of “a call”: “A call about eight. Full moon! Oh! Dear!” or “Full moon, royal evening. A call, quietly” There was this lovely passage from a February 1891 diary entry: “Sat in the moonlight, with the whole world sheathed in a glittering crust of ice on the snow, until the Pelham hills seemed but from silver. Wonderful sights.” Even after Austin died, Mabel continued to equate the romance of seeing the moon and her romance with Austin. In 1905 on the anniversary of his death she wrote from North Africa, “The moonlight was incredibly splendid. And it is the anniversary, the tenth.”

Of course Emily Dickinson, too, wrote about the moon in a number of her poems. Perhaps best known of these is “The Moon was but a Chin of Gold,” first published in the third volume of poems in 1896 (Franklin #735, Johnson #737). But I really love “The Moon upon her fluent Route” (Franklin #1574, Johnson #1528). The first couple of lines speak to both the science and the romance of the moon:

The Moon upon her fluent Route

Defiant of a Road

So on this day of the “Super Snow Moon,” I think of the ways in which both Mabel and Emily captured it so well.

And here’s how my son, Jonathan, captured it, rising above Johnson Chapel at Amherst College: