We’re almost at the winter solstice. Days have shortened, we’ve had snow here in Boston. Holiday ads have been on the air for months already, but they’ve increased in their frequency and annoying intensity. Houses and stores sport colorful decorations. People are driving around with trees on the roof of their cars. ‘Tis the season, for sure.

If you’re like me, the whole holiday season and onset of winter brings a very intense set of mixed emotions. I, personally, have a rule of never setting foot in a store between Thanksgiving and New Years because I just can’t stand the hype. And though there are things I love about winter, like many New Englanders (having lived here longer than any other place I’ve lived I guess I can now claim this title, even without having grown up here!), I greet this time of year with some ambivalence.

I think the combination of the almost inevitable holiday let-down  and knowing that the cold weather will be with us for a while can cause some personal incongruities. No matter what you celebrate, when you’re an adult it’s just not with the same joy you had as a child; snow days once greeted with a wild cry of “no school!” and leaps into snowdrifts become logistical pains of having to deal with no school days and consequent rescheduling, shoveling through snow drifts and back aches. Isn’t there a way of retaining that child-like joy when the snow starts to daintily dance from the sky?

As I thought of this, recently, I decided to look back and see what Mabel, Millicent and Emily seemed to think of this time of year. It turns out that each of them had her own share of holiday/winter ambivalence.

Throughout the years of her relationship with Austin, Mabel always rejoiced in the season but mourned that she and Austin were unable to spend it together. In 1888 she wrote of how Austin had given her an oak writing desk for Christmas; this thoughtful gift pleased her, 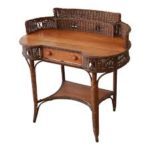 but also made her realize that it was a piece of furniture that wasn’t going into their home, as she thought it should. Mabel knew that while she would use it to craft and revise her writing upon it, the desk was a poignant reminder that she had not yet found the kind of response to her writing that she most desired. “But if I were to become sufficiently well-known to be asked for articles and stories, that sort of stimulus would be very sweet to me. I do long for a little real, tangible success,” she wrote in her journal.

Of course after Austin died, for years Mabel wrote of feeling his loss greatly at the onset of holidays, at the year’s end, and at the commencement of winter, the season in which the two of them had gone for blissful sleigh rides through fields of unbroken white beauty.

For Millicent, too, the holiday season brought about thoughts of missed opportunities. In an entry from her journal in 1925 she wrote, “The major mistake of my life occurred in the winter of 1912-13. I met Walter. He asked me to the Winter Carnival at Dartmouth. My mother went too, and we stayed at the Wilder’s house a few miles down the river from Hanover. Walter once told me that as we were sitting by the fire, and he was about to ask me to marry him, my mother came in. He could have asked me later, but he did not.” It’s interesting how Millicent’s regrets got wrapped around somehow blaming her mother and blaming Walter –the truth was that at the time, she had little to no interest in him and probably would have turned him down, anyway. But in the receding of time, history had corrected itself in her mind. And interestingly, for years afterward this time of year made her think of what she’d come to believe was the lost opportunity of marrying Walter earlier in life when there might still have been a possibility of having children.

As for Emily, as L. Edwin Folsom pointed out in a 1975 article in American Literature, “Involved in the very essence of seeing ‘New Englandly’ are the ‘flitting’ of the seasons and especially the ‘Snow’s Tableau’ in winter. It would seem logical, on the basis of such a statement, to expect a great deal of winter imagery-cold, snowy Connecticut Valley imagery-in Emily Dickinson’s poetry. Yet, except for a very few poems …winter imagery seems strangely absent.” Folsom went on to suggest that Emily “wavered between a hope for an eternity of spring or summer, a new Eden, and a fear of an eternity of winter, a frozen grave.” Her poems about summer give transcendence and hope, the ones about winter, a different sort of reality, one with only “a certain Slant of light.”

“Winter is good” (poem 1316 in Johnson, 1374 in Franklin) exemplifies Emily’s mixed feelings about the season. Linda Sue Grimes posits on the Owlcation.com site, that this poem’s first verse “slyly humbles the cold season but not before distinguishing its multitude of genuine positive attributes.”

Emily seems to suggest that to truly enjoy the winter, we would have need to first drink in the summer. While many people will never embrace winter’s delights, knowing the contrasts of the season might be what allows us to appreciate them both. Even the frost of winter can be thought of as having something in which to rejoice if we can see that its contrast to summer provides a kind of other-worldliness. And the cyclical nature of it all is something Emily celebrates:

Winter is good — his Hoar Delights
Italic flavor yield
To Intellects inebriate
With Summer, or the World —

Generic as a Quarry
And hearty — as a Rose —
Invited with Asperity
But welcome when he goes.

So wherever you are when reading this and whatever you celebrate this holiday season, I hope for all of you an understanding of why so many of us feel ambivalence, and an ability to overcome it by appreciating all of the differences that this world brings to us. Seasons are to be celebrated – all of them. And may you all find that inner-child this winter so that you can again find joy in its frosty delights. 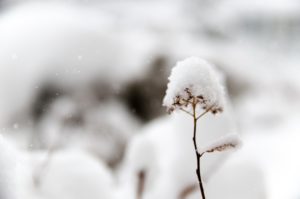 Photo by Hide Obara on Unsplash